Let me start off by saying that this was so much fun!!!!!! For those of you who are close to me, know that I swore up and down I would never do a triathlon. Why? I'm pretrified of open water. I have never biked before and the thought of doing all three in one day, no way! I was a swimmer in high school and college, but these days I have designated myself as a runner. Until 6/5/11. I have never been more proud to say that I am now a triathlete!
The Friday before race day I got a phone call from a close friend of mine. Matt and I were just leaving the gym when I got the call. She said that she was just watching the news and that it was announced that Beltzville State Park closed the lake to swimming due to high bacteria levels. I have to admit I was disappointed and became very nervous. Swimming is my strength so I was expecting to use that come race day. What now? We had to mentally prepare ourselves for a duathlon. Run, bike, run. GREAT! We were just coming off of two half marathons in two weeks so the thought of running more than a 5k on race day was not sitting well with me!


Preparing for a triathlon is a lot different then prepping for a running race. There was a lot for me to remember that night. Everything for the bike, and all of my running and swimming gear.
That morning we went and set up our bikes in transition. I honestly had no clue what to do and where to put things. I had Matt help me. But I will know what to do at the next one.
Waiting at the swim start, I put on my wetsuit. Did I mention that I hate swimming in them? I am not used to having my shoulders restricted. But, wetsuits are fast! Matt convinced me to get in the water and warm up a little bit before my wave started. I'm glad that I did. I got some nerves out of the way. I was expecting the water to be freezing cold but it was pleasantly warm! I swam a little, loosened up my arms and went and lined up for my start. We were the pink wave. Imagine how excited I was when I found out I'd be wearing a pink swim cap! Haha. Next thing I knew, we were off. It was extremely difficult for me to see during the swim. I don't know if it was because it was very cloudy, or the water was really dark, or what. I know that my goggles were extremely fogged up. I remember I literally had to stop in the water and clean out my goggles so that I could see again. I even considered taking them off completely! But, somehow I made it. I ran over some people, passed some people, and next thing I know I'm running up the shore and into transition 1.


I'm trying to dry my feet the best I can while taking off my wetsuit. I hear a guy behind me say what an awesome swim I had. I'm pretty sure I was the second or third female in my wave to exit the water. I simply replied with a thank you and kept moving. Now I think back, that guy must not have been in a rush to get on the bike. He was really taking his good old time just chatting away. In the meantime, my bike shoes, helmet and sunglasses were on, bike was off the rack and I was off. 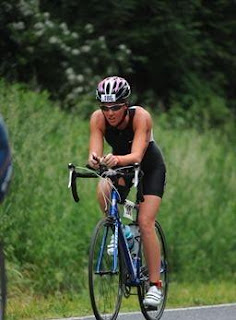 I had no trouble getting on the bike at the mount line. I really thought I would. For those of you who don't know my beginner biking experiences.. the first time I tried to get on Matt's road bike I fell right over in the street. Not this time though! However, I was no more than five minutes into the bike course when I tried to shift to the big ring to gain speed down a hill. I popped the bike chain to the outside! I was proud of myself though, I didn't panic. I simply got off, put the chain back on and got back on. What was even more exciting was that those bikers that passed me while I popped my chain and got off to put it back on, I caught right back up to them!
Matt and I rode this bike course twice to train for this race. I am thankful that we did. This bike course has a decent amount of hills and on race day I knew exactly where they all were. I didn't have much confidence in my biking until this race. I thought I was terrible at biking hills. Well, I can't tell you how many people I passed going uphill. I was able to take my nutrition on the bike as required and I felt great. At the bike finish, I was able to dismount successfully. After dismounting there is a decent run back into the transition area where you drop your bike and gather your things for the run. I liked the run off the bike because I was able to get my legs situated for the run.

I felt alright on the run considering I just swam and biked 17 miles. However, my 5k run was not as fast as I would have liked. Bummer. But at least I know what I need to work on. At the turn around on the run course I started to feel a lot better than I did the first half. Next thing I know, I am passed by someone in my age group. I remember looking down at the age written on her leg and thinking "oh great!" I tried to keep up, but my legs just didn't have it. I still finished strong and gave it what I had. 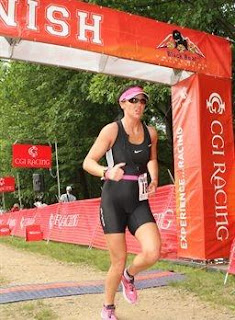 To recap: I finished 4th overall in my age group. I missed 3rd place by 1 minute. The girl in my age group that I said passed me on the run, she finished 3rd. I finished 88th overall out of everyone in the sprint distance.
What's next? Once again, as my close friends know, I swore up and down that I wouldn't do a triathlon, let alone purchase a bike. Well, I lied. I recently purchased a Trek Speed Concept, in pink! I should be riding it by this weekend! I have also registered for a triathlon in New Jersey July 23rd. Matt and I are also going to be doing a triathlon the week before in Bath, PA. Possibly another one in August. I have even begun to look for next year. I am pretty sure that we will both be participating in the Nautica South Beach Triathlon in 2012. And, it's a possibility we may take next year to train for a half ironman!
For now, it's back to hitting it hard. Working on speed, since my endurance is already there. I have another half marathon in September and I'm running my first full marathon in October. In other words, I've began putting a lot of miles on my legs.
I love it!
Posted by Ashley Stumpp at 12:09 PM No comments: